‘Exploration’ and ‘place’ are central analytical themes and methodological approaches in our recent research – as part of an international project funded by The Leverhulme Trust – in the environmental history of Russia and the former Soviet Union.[i] Our work highlights the importance of local environments and the specificities of individual places to understanding the human-environment nexus – and the importance of the human-environment nexus to understanding core aspects of Russian/Soviet history. This focus is accentuated by the fact that we have explored the places we write about as part of a group of international scholars. Thus, we have gained first-hand experience of the distinctive characteristics of local natural systems, and gained a sense of how these places look, sound, taste, feel and smell. We have also met, talked to, interviewed and in other ways engaged with local inhabitants, specialists in a variety of disciplines who study them, and people who manage and administer them. In this way, our research also makes an important methodological intervention in the research and practice of history: that to write the fullest history, historians need to embed themselves in the places that they study. Our work underscores that ‘place’ is both a topic of study and a theoretical model and methodological approach for scholarship.

We worked with Kate Brown, a prominent and innovative scholar of the former Soviet Union, who has made exploration a central part of her research. She has spoken of places as archives, providing a context as well as a resource, and the value of learning from being there.[ii] We also drew on the approach of the Chinese-American geographer Yi-Fu Tuan, who over a generation ago made a distinction between ‘space’ and ‘place’: ‘”Space” is more abstract than “place.” What begins as undifferentiated space becomes place as we get to know it better and endow it with value’.[iii]

In exploring places in the former Soviet space, we aimed to get a more balanced and nuanced interpretation of the complex environmental history of these lands than is often presented. The words ‘Russia’ or ‘Soviet Union’ and ‘environment’ conjure up images of gargantuan schemes to conquer nature by diverting rivers, ruthless exploitation of natural resources, and ecological disasters brought about my human action.[iv] The undeniable damage caused to the environment is only one side of the story (and has affected most of the industrialised world), and we sought a more rounded picture of Russia’s environmental history.[v]

This blog considers two of the places we visited:

The international importance of both places has been acknowledged by their designation as UNESCO World Heritage Sites.[vi]

Located in the Arctic region, the islands have unique flora and important fauna. They have been inhabited by fishing communities since pre-history and, from the fifteenth century, have been the site of an Orthodox monastery. Monks organised large-scale fisheries and marine mammal hunting, and built an extensive network of canals. The first Soviet labour camp (gulag) was located on the islands between 1921 and 1939. The islands are now the location of research by archaeologists, historians, biologists, including specialists on fisheries, geographers and geologists amongst others. The islands thus offer rich materials to investigate the relationship between state, society, culture, religion and nature, and the role of science and technology in Russia’s Arctic region. 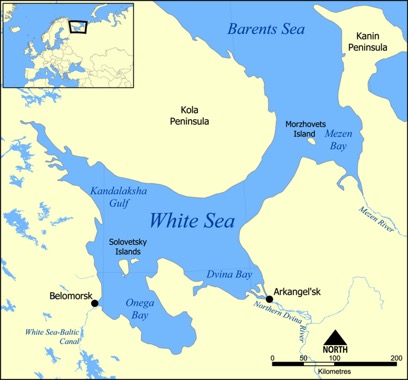 The labyrinths, we learned, were first built by fishing communities over 2,000 years ago. They traced the patterns in the dirt and then placed stones along them. Some specialists have argued that they were designed as part of the fishing experience: at the start of the season, fishers walked through the labyrinth to the centre in the hope that this would help them find their way to abundant catches and return from the sea safely. For other specialists, the proximity of the labyrinths to burial mounds suggests that they were somehow connected to the spiritual world, and the circular paths were those that spirits would walk along to reach the spiritual world.

The Orthodox monks considered the labyrinths to be pagan sites and surrounded them with Christian crosses as if to protect their places from what they considered malign influences.

Founded in 1822 by Archimandrite Makarii, and located in a ravine-valley that has its own micro-climate, with less wind and warmer temperatures, the monks grew plants and trees that were non-native to the region and would otherwise be unable to survive such a northern location.  They conducted experiments with the sorts of plants and trees that might grow there, and learned a great deal about the effects of temperature, latitude, wind, water and other factors on the growth patterns of this flora.

The monks also build canals linking the island’s lake for transport, which we explored in rented rowing boats.

We learned about the harrowing experiences of political prisoners held in the first Soviet labour camp (gulag) which was established in 1921 in the otherwise idyllic setting of the monastery.

The church and lighthouse on top of Sekirka hill was used as a place of ‘special confinement’.

Lake Baikal is world’s oldest and deepest lake: at its greatest extent, it is 636 kilometres in length and 79 kilometres wide; its maximum depth is a staggering 1,642 metres. It holds one-fifth of the world’s surface, liquid fresh water. Baikal’s capacity is twice that of Lake Superior, which is the world’s largest fresh-water lake by surface area. (In marked contrast, Loch Ness, in Scotland, is only 36 km in length and at its deepest only 227 metres.) 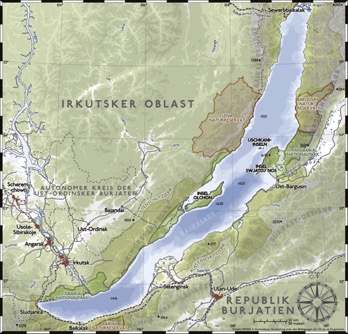 We got a clear sense of the lake’s immense size while sailing around it for three days on our rented boats. 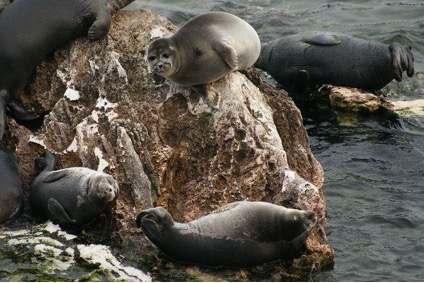 Baikal is the location of three scientific nature reserves (zapovedniki), where ‘models of nature’ are protected against all human activity besides scientific research (and more recently, ecotourism) including Russia’s oldest state reserve, the Barguzinskii, which dates back to 1916, and two national parks set aside for recreation and conservation (as well as many other protected areas in the Baikal watershed). We were privileged to visit the Barguzinskii reserve and to explore its natural riches, including the primeval taiga forest along its shores, in the company of scientific director Alexander Ananin.

Baikal has also had enormous spiritual significance to the faith traditions of the peoples who have lived along its shores, including Shamanism, Buddhism, and Orthodox Christianity.

On the other side of the coin, however, the lake and its unique ecosystem have been and remain under threat. There have been controversies over pollution from a pulp and paper mill, which finally closed in 2013, the impact of the Irkutsk hydroelectric dam built on the Angara river in the 1950s, and a planned oil pipeline. It is further threatened by a dam planned for the Selenga river which flows into the lake from neighbouring Mongolia. We witnessed at first hand a more immediate threat: forest fires around the lake set by lightning strikes and also the carelessness of tourists. The forests were tinder-dry on account of the unusually hot weather in the spring and summer of 2015.

Paradoxically, each evening at the reserve we enjoyed swimming in the lake, where the water was an unexpected and balmy 16 degrees C. Scientific director Ananin told us that this was the hottest recorded since data gathering began almost a century earlier. One of the scientists in our group, Bryce Stewart, concluded that the lake is ‘beautiful but fragile’.[vii]

The conclusions we have reached from our explorations of these and other places have reinforced and expanded our understanding of the vast range of experiences, geographically and chronologically, of the centuries-old encounter between the human and natural worlds in Russia. We witnessed and uncovered evidence of long-term continuities, for example, in the persistence of societies in fragile, remote environments; the Russian tradition of high quality empirical scientific work; and the pioneering work in the area of nature protection, such as at the Barguzinskii reserve. We also experienced at first hand more sudden, dramatic changes, such as the transformation of the Solovetskii monastery into a Soviet labour camp, and the current threats to the environment of Lake Baikal.

From a methodological perspective, our experiences underlined the importance for environmental historians of exploring the environments they study to witness personally, physically, and with all our senses the legacies of the processes of continuity and change they research, and to discuss the issues, involving local specialists, on location with physical evidence for our research questions surrounding us. Further, our multi- and inter-disciplinary workshops and seminars underlined the importance of sharing knowledge and approaches across a range of academic disciplines and finding languages to do so. Echoing Li-Fu Tuan, we got to know our ‘places’ better, differentiated them from the wider ‘space’ they are parts of, and gained a more nuanced and balanced understanding of the environmental history and present of this vast country.

We are grateful to our funder:

Photo credits: unless otherwise stated, all photographs were taken by members of our group during our visits.

We have produced several essays on our explorations of the environmental history of the former Soviet Union:

(A Postcard from Baikal is forthcoming in the same online journal)