Leona’s book, Tyne after Tyne: An Environmental History of a River’s Battle for Protection 1529–2015 was published by The White Horse Press last week. It was an outcome of the wider AHRC-funded research project described here.

It’s hard to believe, but over three years have passed since our AHRC-funded, ‘Power and the Water: Reconnecting Pasts with Futures’ research team first met at the Royal Geographical Society, London, in November 2013 (only five months after my doctoral graduation at Durham University). The project’s creators – Profs Peter Coates (University of Bristol), Paul Warde (University of East Anglia, now University of Cambridge) and Georgina Endfield (University of Nottingham, now Liverpool University), not forgetting David Moon (University of York), who was involved in the planning stages – assembled the optimum combination of research topics and team members (including Ph.D. students, Early Career Researchers and senior academics; geographers and historians). Working closely together on our geographically diverse case studies, the team was to forge innovative synergies within and between its strands of water, energy and subterranean landscapes. In time, it would reconnect past activity and current environmental problems in several elements of the UK’s energy and water infrastructure and share that research usefully with many partners beyond academia. At this stage, however, I was unaware of just how productively we would grow together and develop as a team, feeding off one another’s research projects symbiotically until our respective case studies had become fully blended ‘infrastructural friends’, the sum becoming far larger than its parts, much like the UK’s multi-layered and interconnected infrastructure itself.

The case studies took an extensive tour across the country, incorporating the National Grid, the Severn Barrage proposals, renewable energy landscapes, the Derbyshire lead-mining subterranean drainage channels known as soughs and, of course, my own north-east England’s River Tyne. The research of fellow post-doctoral research assistant (PDRA), Dr Marianna Dudley, into water recreation, how watery environments make us feel, how they encourage us to play and why this has changed over time has challenged me to think much more about feelings and emotions in relation to the environment, and about the physicality of our engagement with particular waterscapes. The research of another PDRA, Dr Jill Payne, into debates surrounding renewable energy landscapes, has pushed me to think much more about aesthetics and why they dominate intense debates about alternative energy futures. And PDRA Dr Carry van Lieshout’s research into the subterranean landscape of the Derbyshire mining soughs, including her brave trawls in full caving gear through some of these little understood underground landscapes, has led me to analyse my historical research from a vertical as well as a horizontal perspective. My ideas and arguments have also been challenged and progressed by stimulating conversations and debates with our project Ph.D. students, Kayt Button and Alexander Portch.

Team Power and the Water out and about at the Port of Tyne and Northumbrian Water Ltd’s Waste Water Treatment Works, Howdon, May 2014 (Photos: Marianna Dudley)

My highlights of the research journey could fill an entire book. I learnt infinitely more than any archival resource could teach me from being out and about around the country, talking to my fellow researchers but also talking to practitioners who were embracing environmental challenges in the present and future, the environmental legacies of the historic activities we were all analysing in depth. In May 2014, I hosted our project-wide Tyne Trip, riding the Clean Tyne Project’s debris-collection vessel up and downriver, touring the Port of Tyne and its mountains of recycled metals and imported coal, exploring Northumbrian Water Ltd’s Waste Water Treatment Works at Howdon on Tyne and taking a tour of the heavily polluted South Tyne AONB with Tyne Rivers Trust. In October 2014, the Power and Water team travelled to Derbyshire, to explore the landscape of the lead mining ‘soughs’. There, as I celebrated my 30th birthday(!), Georgina, Carry and their Peak District National Park partners took us on a fascinating tour, including walking the dry riverbed of the Lathkill, which pushed me to consider what a river is and whether it even has to feature running water. In October 2015, I watched Marianna Dudley and Peter Coates riding the Severn Bore near Gloucester before witnessing Dudley’s group interview of several dedicated and long-established bore surfers over breakfast. This deepened my understanding of how powerful water forces can make people feel. 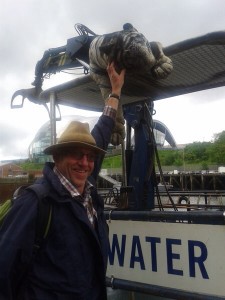 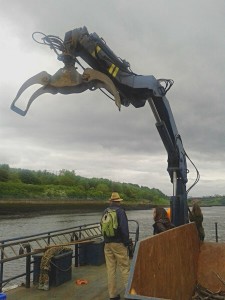 In June 2015, I exhibited my research to the public at the Low Light Heritage Centre, North Shields, and the conversations I had there with local people about their widely different relationships with the Tyne (many of which were nowhere to be seen in the archival documents) supplied my tentative conclusions with more fresh, and arguably overlooked, ideas which boosted the prominence of local people in this academic book about their river.

My affiliation as a PDRA at the University of Bristol while analysing the north-eastern case study of the River Tyne has often caused confusion. Throughout the project, many have asked me to explain the geographic disparity between the place of my employment and the place of my topic, and my answer takes us to the heart of the objectives of our heavily integrated, truly collaborative project. Our project logo looks like a star at first glance, but if you look a little closer, you will see that it consists of three triangles representing the research strands (blue for water, orange for energy and green for subterranean landscape).

The triangle connects the geographic locations of the institutions in Bristol, Nottingham and Cambridge. Had I been based at a university in Newcastle, and studied the Tyne’s environmental history as a sole post-doctoral researcher, my conclusions would have been developed in a far narrower comparative context. Moreover, my attachment to the Bristol-based team was natural insofar as my colleagues there were also primarily focused on rivers. Our nationwide project enabled me to visit fellow researchers’ case study sites often, to discuss the overlaps and distinctions between our topics and to listen to a wide range of non-academic partners talking about how they could use our research. Witnessing leading geographers and environmental historians at the cutting edge of evolving interdisciplinarity stimulated my mind continually, challenging me to revisit, reconsider and rewrite my conclusions about the Tyne, again and again. My research into the Tyne’s environmental story taught me as much about the UK’s infrastructural networks, the symbiotic exchanges and trades of one region’s surplus natural resources, forces and energy flows in return for those of other regions and places. Britain is an island, but its infrastructural networks have been busy themselves in the past, present and future to connect it internally and externally to innumerable flows of water, energy and natural resources. Similarly, Tyne after Tyne flows in and out of the infrastructural research friends it made on its journey to fruition. If you look closely, they’re installed into every page of the book.

The view downriver from Maisemore Bridge as Dudley and Coates rode the Severn Bore. Maisemore Weir and Lock are the upper limit of the tidal Severn (Photo: Leona Skelton)