A Provocation by Verena Winiwarter, Alpen-Adria-Universität Klagenfurt, and Response by Ruth Morgan, Monash University. We are privileged to count Verena as a longstanding Editorial Board Member for Environment and History and Global Environment; and Ruth is the newest E&H Board member. Ruth is in the early stages of projecting a workshop and Special Issue of Environment and History on the gender issue. This blog post came out of discussions at ESEH Zagreb and we hope to see its seeds germinating across the environmental history community.

So many of them have been forgotten. Collectively, we remember Rachel Carson and perhaps, Alice Hamilton, and that’s about it. Gro Harlem Brundtland should also be mentioned, because of the 1987 Brundtland report, her Norwegian last name constantly mispronounced by anglo-saxon speakers. But there is an iceberg out there and I wish we would hit it with our scholarship.

When I was asked to speak to a gymfull of women from a rural background in the Austrian periphery a few years ago, I suggested speaking about them – ‘Women in the history of our environment’. This resulted in introducing an attentive audience to seventeenth-century ecologist avant la lettre, Maria Sybilla Merian and her modern counterpart, Cornelia Hesse-Honegger, a Swiss illustrator who painstakingly documented the destruction Chernobyl had brought about on the bugs she was trained to accurately paint as a scientific illustrator. I talked about Nellie Kershaw, who died in 1924 without any compensation for her debibitating asbestosis, with her case being used to introduce legislation to protect workers. I talked about an English nanny pushing a gas-masked fitted pram and wearing one herself, and about a little girl caressing a doll on the steps of a building in London in 1940, the steps being the only traces left of a house in a great pile of rubble that might have been her home. I talked about Lina Hähnle, clad in the black, fitted dress of her times, surrounded by four sons in the image I am using, who at age 48 founded the German Bund für Vogelschutz, which would become the most successful nature protection association in Germany. I showed an image of Phyllis Barclay-Smith (1903-1980), who had presented a stuffed waterbird covered with oil-slick to the experts gathered in 1930 in Amsterdam at a congress of ornithology and thus helped a great deal in starting awareness for the protection of the seas. I had 45 minutes, ample time to present more women than I shall venture to mention here. 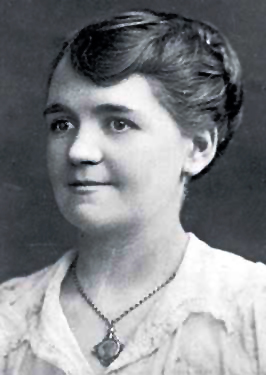 Lucy Deane Streatfeild, a pioneer female factory inspector and instrumental in the introduction of asbestos legislation

When I had finished, my talk had affected me, something that never had happened to me before. As if I had listened to my own words for the first time, I was incredibly sad and angry about the story I had told, a story that has not been written, at least not in German and  accessible to an interested audience beyond scholarly circles. The audience applauded. The lady who had invited me to speak, the headmistress of the school for agricultural training (originally these had been gendered, and she still runs a predominantly female operation), told me thereafter that she only dared inviting me because she had read an interview with me in a newspaper with an image where I knitted socks. The school not only paid a generous honorarium upon hearing that I pay travel stipends for young colleagues from this income, they also gave me a loaf of home-baked bread, flowers and several skeins of wonderful wool. Since then, I have knitted in public. Since then, I have become aware of a gaping hole in our environmental histories. I have found a pioneer of conservation in Austria whose name appears in official documents but cannot be found in the histories of the association she contributed to. I have found 19th century Viennese upper-class women busily organizing charities for flood victims, a sort of aid never discussed in the literature. I have invited young women to write about female aspects of Austria’s environmental history in their master thesis.

Sorry, guys: I am not buying the gender turn of what used to be women’s history any longer. Yes, gender is a multi-relational category, such as class, race and others are. Yes, all histories matter. But all-too-many women’s environmental histories remain yet to be written.

We waited. And we waited. We were surprised (and even a little bit embarrassed) that only one person responded to our call. Perhaps this lack of interest was because colleagues working on these themes might have already found other avenues for their research, or were not intending to travel to Zagreb, or preferred to present with people they already knew. But still!

By the time the conference began, we were back to where we started – just the two of us. Thankfully our panel chair, the indefatigable Dolly Jørgensen, kindly agreed to act as a discussant of our papers. In our papers, we both studied the role of masculinity in agriculture and irrigation engineering in Australia at the turn of the twentieth century. We aimed to illuminate the tangled web of relationships between technological knowledge, ideas about environmental control and nation building, and the impact of mechanized labour on the bodies of men and the environments in which they worked. But would anyone come to listen?

I am happy to report that, yes, they did. We were pleasantly surprised to find that our fellow environmental historians from Europe and North America were interested in our panel after all. And they wanted to know more – not just about the Australian context in general, but also how histories of masculinity were related to histories of women, femininity, motherhood, nationhood, and domesticity. They asked about the place of whiteness and race in our work, and identified similarities with their own work on household energy use, migration, and the Anthropocene.

Certainly, we were comforted by our colleagues’ enthusiasm and engagement. But the question remained, where was gender? No other panels at the ESEH were explicitly focused on ‘gender’. No other papers referred to terms such as gender, women, femininity or masculinity in their titles. The only reference to gender across the entire conference program was the Women’s Environmental History Network reception, sponsored by the American Society for Environmental History (ASEH).

But it’s not just women who need to think about gender in their professional lives and in their research. Gender analysis is a project for all of us studying environmental history.