The Estonian Centre for Environmental History (KAJAK) was established in 2011. Slowly but steadily, the habit of incorporating environmental perspectives into ‘classical’ historical research has gained a footing in Estonia. Ecocriticism and ecosemiotics already existed; the cooperation between the scholars from these fields with environmental historians has been lively and rewarding. This cooperation has borne fruit in a number of jointly organised conferences and other academic events (e.g., the EASLCE biennial conference ‘Framing Nature’ in 2014 and an international doctoral school ‘Animals in Transdisciplinary Environmental History’ in 2015, to name but a couple), plus several joint efforts resulting in publications in Estonian and in other languages, such as English, German and Russian.

Publishing in languages other than English is not highly ranked by the current Estonian research assessment system, nor is publishing non-English monographs valued as representing outstanding scholarly efforts. This is certainly one of the reasons why article collections, special issues and popular books prevail in our mother tongue and are featured in the below review. However, at KAJAK we find that bringing the knowledge produced in environmental historical research to a wider academic community, to students and to laypeople is as important as producing this knowledge and participating with it in the international scholarly community. We are a small country and our resources are limited, meaning that we must make sure that our work makes sense not only to our closest colleagues, but to society at large.

Food history is a topic that has been systematically addressed in Estonia. 101 Estonian Foods was initiated by a research grant on Baltic food history and environmental history. Co-authored by four food researchers of different academic backgrounds from history and ethnology, it brings some of the best known foods as well as some totally forgotten food items from Estonian history into the context of transnational and environmental history. The book interprets Estonian food culture as a phenomenon of environmental history and cultural exchange. In addition to this recent work, there is earlier solid ethnographic research in food history that can be relied on, as well as recent Estonian ethnobotanical works, such as the book, Eesti looduslikud toidutaimed: kasutamine 18. sajandist tänapäevani [Estonian wild food plants: Their usage from the 18th century to present] by Raivo Kalle and Renata Sõukand (Tallinn: Varrak, 2013). In English, a prize winning special issue edited by Diana Mincyte and Ulrike Plath, ‘Food Culture in the Baltic States’, Journal of Baltic Studies (September 2015), features studies about food ethics, foodscapes, food markets and consumption, wild berry collection, hunger narratives and herring fishing.

Estonian food has been shaped by the local natural environment and climatic conditions, not least by the presence of four distinct seasons. Diversity has been brought to the diet by wild berries and edible plants picked from local forests and bogs, as well as by fish caught from the rivers, lakes and the Baltic sea. Food items were also imported to Estonia from Western Europe and new food habits taken up from Eastern Europe.

Cultural geography is a discipline that is richly developed in Estonia, having achieved outstanding research results in interpreting Estonian landscapes and their cultural history. Currently, the Centre for Landscape and Culture of Tallinn University is carrying out research on landscape theory and its practical applications. The result of joint efforts, ‘Landscape and Memory’ was supported by two research grants, each of which considers the development of interdisciplinary cooperation to be one of its primary objectives. Departing from a dialogue between cultural geographers and cultural memory researchers, the book combines approaches from history, archaeology, heritage studies, semiotics and media research. Key subjects are landscape, memory and heritage. Individual chapters address relationships between landscape and collective memory in Estonia from the Middle Ages to the post-Soviet period. The book demonstrates how environment plays an important role in historical writing, lying somewhat to the sidelines but still a ubiquitous force behind all events. Discussions of remembered, recreated and forgotten landscapes, as well as of spatial practices and representations of perceived space that add still more layers to historical and identity-related phenomenon, help clarify our constructed identities and the logic behind broadly-written histories. As Valter Lang points out in his contribution, the ‘public demand’ in the formation of the ‘correct’ interpretations of the past should never be underestimated. Such insights are relevant to the writing of environmental histories, too.

Estonian environmental historians are working together with colleagues from all geographical directions, including the East. One of the fruits of such longstanding cooperation is the present book, in Russian, devoted to the insights of Alexander von Middendorff, a great naturalist and explorer of Baltic-German origin who worked in the distant corners of the Russian Empire, but who also contributed to the development of cattle and horse breeding in his native Estonia. This publication is an important overview of the history of science in the Russian Empire during the nineteenth century. It presents the state of scientific research in Middendorff’s times and his contributions to it, especially his research conducted on natural conditions and peoples of Siberia. Middendorff actively promoted the modernisation of the Tsarist imperium. The authors conclude that Middendorff’s ideas have not lost their relevance even today. Historical accounts of his life and the results of his numerous expeditions provide a firm platform for future researchers who wish to continue contextualising nineteenth-century Russian explorations in global environmental history. 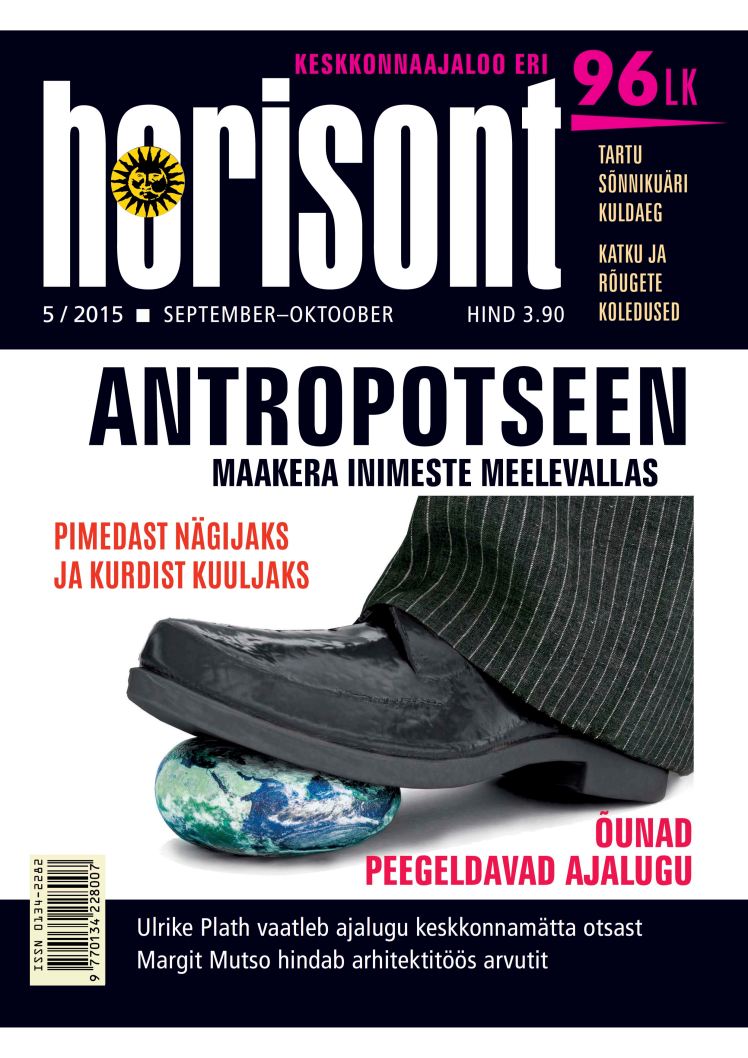 Environmental history has recently been introduced to a broad public in two special issues of widely read Estonian journals – Horisont (5, 2015), and Vikerkaar (6, 2016). The cooperation of KAJAK with the flagship journal of Estonian popular science, Horisont, was an enjoyable experience for the authors, and reportedly pleased many readers, too. The late editor of Horisont, Kärt Jänes-Kapp, played an important role in the publication process, helping to select and combine various contributions from KAJAK members. The issue opens with an overview of the state of environmental history research across the globe, with many responses from international scholars being collected during the ESEH conference in Versailles. The cover story on the Anthropocene, jointly written by semiotician and environmental humanities scholar, Kati Lindström and Tiiu Koff, geologist and professor at the Institute of Mathematics and Natural Sciences of Tallinn University, discusses the question of geological markers for the Anthropocene, as well as (negative) long-term traces of human activities in the Earth’s crust, drawing it all together through the philosophical question of the powerful sense and sentiment of eschatology, that special marker of the human species. Other topics explored in this issue regard plague and environmental health; climate as an agent that shapes history; gardening and apple-growing as philosophical and societal activities; the historical importance of waterways; and the peculiarities of local fecal industries. Climate history researcher Andres Tarand (who, incidentally, is Estonia’s former Prime Minister) explains how weather can be hindcasted, and summmarises recent findings in his co-authored book Eesti kliima minevikus ja tänapäeval [Estonian climate in the past and in the present] (Tartu: University of Tartu Press, 2013). This issue of Horisont also features an interview with Ulrike Plath, head of the Estonian Centre for Environmental History, discussing the possibilities of how an ‘environmentally biased’ historian can place the history of a small country into a wider, global environmental perspective.

In 2016, the Estonian monthly cultural magazine, Vikerkaar [Rainbow], also devoted its June issue to environmental history, focusing on questions of the Anthropocene and human impacts on environment and (human) bodies. The issue featured translations of some seminal texts by such authors as Paul Crutzen and Eugene Stoermer, Christophe Bonneuil and Kate Brown. A compilative overview of environmental humanities by Kadri Tüür was included in the issue.

Beside these two special issues, a number of articles appeared in other Estonian periodicals, such as an interview by Ulrike Plath and Kati Lindström with Verena Winiwarter entitled ‘Mis on keskkonnaajalugu’ [What is environmental history?], in Tuna [Past] (2, 2015). Tuna also published material on other questions about environmental history. For example in 2014, Ülle Tarkiainen wrote a piece on assarting, i.e. the clearing and burning of woodlands for agricultural puropses, as a cultural phenomenon in Northern Europe and Estonia and as a factor shaping the landscape; Marten Seppel published an extensive study on The Great Famine of 1601–1603 in Northern Livonia, detailing its causes, statistics, and cultural implications. Priit Raudkivi discussed the impact of Iceland’s Laki Volcano eruption of 1783 in Estonia (Acta Historica Tallinnensia 20, 2014).

Inimene ja looduskeskkond [Humans and the environment] is the title of a section of the permanent exhibition in the new and magnificent Estonian National Museum in Tartu, to be opened in October 2016 (main curator: Liisi Jääts). Another cooperative project aimed at popularising research on environmental history and taking shape in this museum is a thematic exhibition consisting of five ‘topical islets’ that feature the role of wars, diseases, manure, gardening and waterways in Estonian history, and simultaneously draw connections between the location of the museum and global environmental processes.

Last but not least, the 2016 annual exhibition of the University of Tartu Museum will take up a similar theme. ‘Maailma mõõtmine: 6 Eesti meest, 6 maailma muutnud avastusretke’ [Measuring the world: 6 Estonian men, 6 explorations that changed the world] is devoted to environmental and science history, focusing on six naturalists and their explorations that have helped expand our understanding of the environment we live in and shape through our daily lives, politics, and our writing of history.