By Paul A. Elliot 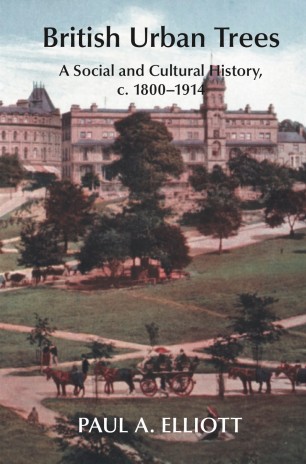 As we supposedly strive to distance ourselves from Europe, it is always useful to be reminded how closely intertwined and mutually stimulating British and European cultures have been. The history of urban tree-planting provides an excellent example of the benefits of intra-European emulation and rivalry.

Once the formalism of baroque had declined during the eighteenth and nineteenth centuries, European gardeners increasingly looked to Britain for inspiration and the phenomenon of the English garden and subsequently suburb became fashionable. Continental gardeners were inspired by the naturalism of Capability Brown and Humphry Repton to adopt and adapt the methods of British landscape gardeners (J. Dixon Hunt, The Picturesque Garden in Europe, London, 2003). But it was always a reciprocal relationship and British landscape gardeners such as John Claudius Loudon, Joseph Paxton and William Nesfield eagerly embraced European models and combined the formalism of classic Italian landscape with that of picturesque naturalism. As trees and parks proliferated in British towns partly as a response to problems caused by industry, population growth, social inequality and poverty, European green spaces and institutions provided inspiration including public gardens, botanical gardens and cemeteries such as Père Lachaise in Paris. The great spa towns of central Europe were eagerly emulated by British resorts with their hydrotherapeutic institutions, lavish hotels and winter gardens (P. A. Elliott, British Urban Trees [Cambridge, 2016], 297-339). European tree collecting, forestry and arboriculture were equally vital to the British embrace of urban forestry, as Loudon’s Arboretum et Fruticetum Britannicum (1838) clearly demonstrates. German foresters such as Dietrich Brandis and William Schlich were welcomed in Britain and its colonies, their books were translated into English and Continental-style schools of forestry established (G. A. Barton, Empire Forestry [Cambridge, 2008]). French and German tree taxonomies were eagerly embraced and adapted whilst botanists and public health campaigners marshalled the achievements of Continental chemists to study the impact of atmospheric pollution upon urban trees and justify town tree planting schemes. Ideas, specimens and practices were freely exchanged between British and European gardeners, nursery companies, landscape architects and planters resulting in hybrid designs and institutional forms. The Scottish landscape gardener, arboriculturist and nurserymen William Barron’s company, for example, provided designs for European gardens and supplied trees, shrubs and tree transplanting machines. Several young men from Germany, France and Holland were employed by the company, whilst Barron’s son was educated under Prince Herman Puckler-Muskau and the German landscape gardener Eduard Petzold at Muskau in Silesia and in the Netherlands. This co-operation between two of the leading European landscape gardeners and arboriculturists continued when Barron’s grandson attended a Potsdam government school and Petzold’s son worked at the company’s Borrowash nursery in Derbyshire for three years (P. A. Elliott, C. Watkins and S. Daniels, The British Arboretum [London, 2011], 31-5, 159-63, 167, 177-9).

Stimulated by inter-urban emulation and rivalries, during the second half of the nineteenth century European towns and cities were transformed by trees as municipal authorities initiated and took control of park provision and planting schemes. These were closely associated with major improvements in health, sanitation and urban planning such as new sewerage, water-supply and transport schemes, and provided opportunities to assert local, regional and national urban influence and identities and improve government control over growing city spaces (H. W. Lawrence, City Trees [Charlottesville, 2008], 228-30, 236-242). The transformation of Paris under Napoleon III during the 1850s and 1860s by a team led by the prefect Georges-Eugene Haussmann, engineer Jean-Alphonse Alphand, architect Jean-Antoine Gabriel Davioud and the landscape gardener and horticulturist Jean-Pierre Barillet-Deschamps provided the most influential inspiration and model for European urban greening between 1850 and 1914. Having come to know the royal parks and squares of London as Louis Napoleon, the emperor encouraged the development of the Bois de Boulogne, tree-lined boulevards of the Champs Elyse were driven through older medieval parts of the city whilst squares were laid and planted at intersections (W. Robinson, The Parks and Gardens of Paris, third edition [London, 1883]; G. F. Chadwick, The Park and Town, [New York, 1966], 152-62). In Vienna the major Ringstrasse scheme of park provision and tree-lined boulevards provided an opportunity to beautify and reinforce the status of an old imperial capital facing the challenges of dual-monarchy in a tottering polyglot empire (R. Rotenberg, Landscape and Power in Vienna [Baltimore, 1995]). In Berlin urban greening was intended to crown the glories of the capital of a newly unified imperial state and in Cologne, led by the architect Joseph Stubben, the Ringstrassen was intended to serve aesthetic, practical and hygienic considerations (Lawrence, City Trees, 256-8). In turn, European models of urban greening – which had themselves received inspiration from encounters with so called exotic plants and cultures such as those of India and China – were exported and adapted around the world as power rivalries were projected globally through imperialism.

In the Part II of this blog we will explore how tree planting in European cities helped to stimulate British urban arboriculture.

Fig 5: Scene in the Tiergarten, Berlin, replanted in the aftermath of WWII devastation, author, 2007

One thought on “Nineteenth-Century Urban Trees: Britain and Europe: Part I”